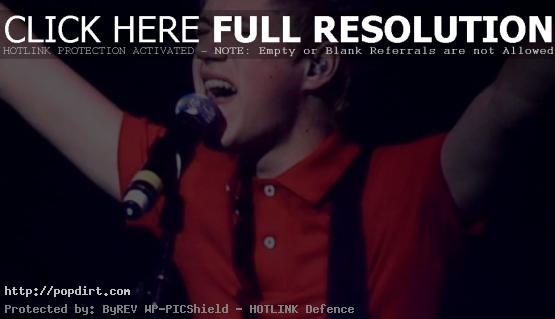 Niall Horan of One Direction was on the phone with On Air with Ryan Seacrest the other day, addressing the rumors that have been swirling around a budding romance with ‘X Factor’ judge Demi Lovato.

It’s been really good. We had time off after our long trip in American and Australia and then we’re back on tour in America and really enjoying it.

On their time off:

It was absolutely amazing, especially since we were working ten weeks straight in the U.S. and Australia so we had to have a couple of weeks off to relax. I went home to Ireland, just chilled out, didn’t do much. I just wanted to do nothing because it was such a high for ten weeks.

On his favorite thing to do when having a break from performing:

Sleep. Any chance I get, I try to sleep as much as I can. Sleep and eat and play the guitar.

On the band wanting to get a dog:

True. Yeah, we looked into it. It’s gonna be hard to do since we got so much traveling to do next year, but yeah we looked into it. We wanted to get a little mini husky. We got the idea from Big Time Rush. James (Maslow) from Big Time Rush, he’s got one. Mini huskies and there’s only a few of them in the world. We wanted to get one but it was a bit too much hard work with quarantine and all that stuff.

On releasing a second album before Christmas:

We’re trying to get it done. We’re working on it at the moment and recording whenever we can and writing songs on the road. Hopefully we can get it out before Christmas.

No. He didn’t say anything to me. I don’t know where, they kind of plucked stories out of the sky and make stuff up.

We’ve spoken on it, yeah. She’s a cool girl, so I’ve got in contact with her. She’s really nice, and I don’t know what’s gonna happen.

Listen to the interview at kiisfm.com.