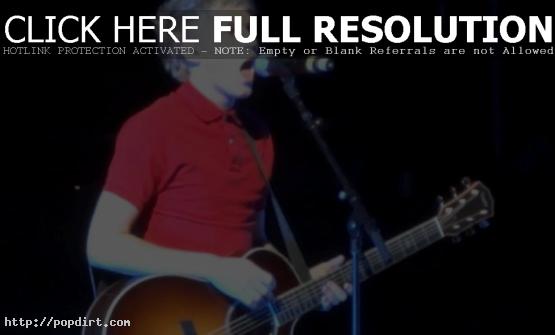 Niall Horan of One Direction was on the phone with ‘On Air with Ryan Seacrest’ the other day, where he talked about the follow-up to their debut album ‘Up All Night’, teaming up with Ed Sheeran and McFly on the project, what’s up with him and Demi Lovato, Harry Styles being linked to curvy model Kate Upton, and adding a third concert in Los Angeles to their 2013 tour schedule.

On the group’s second album:

I literally just left the studio. I’m just at home right now. We’ve been working on that. It’s not too different from the first one. We feel very, very happy about it because we obviously feel nervous about it, second album, you never know what you’re gonna get from us. We’re really excited about it. It’s really fun, very heavy on guitars and drums, so we’re really excited about it.

On collaborations on the album:

Yeah, today we’ve been with Ed Sheeran. We’re quite good friends with him so we worked quite a bit with him. We call him the Gingerbread Man. We worked with some English bands like a band called McFly. We worked quite a bit with them too. We also went back to the original guys that did ‘What Makes You Beautiful’ and ‘One Thing’ from our first album, Rami, they’re doing really well in the American charts at the moment. So we’ve gone back to them guys to get more songs off them. We obviously try to keep that relationship with people we’ve worked with on previous albums.

On how his relationship with Demi Lovato has advanced:

On reports his bandmate Harry Styles had been texting Kate Upton:

Harry never said anything to me. I don’t know. Maybe he’s hiding something.

On their upcoming Staples Center concerts in LA and doing a third show:

We’re super excited. We love coming to LA. California is just a great place. We’ve obviously spent a lot of time there being recording and doing shows there too. It’s good to always come back. When we heard a lot of people wanted us to come back, we said maybe lets do another show.