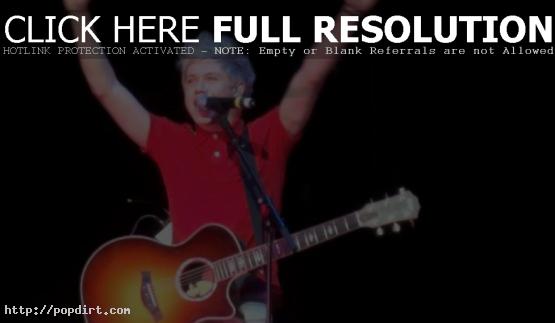 Niall Horan of One Direction was on the phone with Jeroen van Inkel of Q-Music in the Netherlands the other day, where the boy band member talked about the YouTube success of their ‘Live While We’re Young’ music video, how filming the video was improvisational, taking a step forward with their second album ‘Take Me Home’, plans to tour in the Netherlands, how he deals with fame and how he manages out in public going to the grocery store.

On 1D’s ‘Live While We’re Young’ music video breaking the YouTube record for most views in the first 24 hours, Niall said, “We found out that yesterday, and that’s absolutely mental considering how big the ‘Boyfriend’ video by Justin Bieber was. I think it’s something to be very proud of. We’re very proud of the video and the amount of views that it has gotten so far has been aboslutely crazy.”

Talking about the best part of filming the ‘Live While We’re Young’ video, he said, “I think how cool it was. We had this really cool director and there was no actual script to the video. It was literally like, ‘Okay, here is the scenario, now you do whatever you want in that scenario.’ It was just the freedom of it, and we’re glad that happened, because it turned out really cool.”

On what to expect ‘Take Me Home’, Niall said, “It’s gonna be another fun album from One Direction. It’s not a million miles away from the first album, but we wanted to inspire something bigger from the first album so I think we’ve done that. We’re very proud of this album, where literally the last few days we’ve been putting the songs together for the album. We’re ready to roll. It comes out November 12th and 13th around the world, so it will be fun.”

On prospects fans in the Netherlands can see the group visit the country, he said, “I don’t know just yet. Maybe next year I think, maybe. Hopefully we can get there soon because I really enjoyed myself when I was there last time. The fans are amazing there. Really, really fun. Our Dutch fans, they’re very curteious. Eveyrone was really nice to us, Dutch people in general.”

Talking about how he deals with fame at a young age, Horan said, “I don’t really kind of deal with it, I just kind of go with it. I just kind of roll along and just do what I’ve got to do. Do whatever is on the schedule and just kind of do it. I think if you let it get to your head, it’s gonna mess you up. Then you become big headed and stuff and then you get an ego. None of us are like that. We were brought up instead of dragged up by our parents.”