Star reports Nick Lachey’s attempt to win back ex-wife Jessica Simpson by sending her a dozen white doves on her 26th birthday went horribly wrong after the birds pooped all over her Beverley Hills mansion. “Jess was horrified,” a source said. “It was like a terrifying scene from Hitchcock’s ‘The Birds’. They flew everywhere. It took hours to get them out. The doves got very nervous whenever anybody approached them. Poor Jess had to have her entire home disinfected on her birthday. She was not impressed, but she knew Nick meant well.”

Nick Performs On The ‘Today’ Show 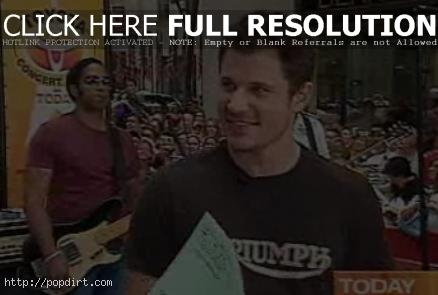 Nick Lachey performed live on the Plaza as part of the ‘Toyota Concert Series on Today’ early Monday (July 3).

Video of an interview and performances of ‘What’s Left Of Me’, ‘The Hardest Thing’ and ‘I Can’t Hate You Anymore at Bing.com have since been removed.

July 1, 2006 – Vanessa Minnillo spoke with Perez Hilton at Stereo on Friday night (June 30), where the ‘Total Request Live’ co-host told Perez she’s upset that people might think poorly of her because of reports she’s dating Nick Lachey and Derek Jeter at the same time. Minnillo said she’s very happy – and monogamous – with Lachey, and her friends said likewise. “Nick’s a really great guy,” she said. “He’s very sweet and we’re really happy.” As for the couple living in different cities, Minnillo said, “There are certain sacrifices that we make. I’ll travel with him on tour. He’ll come visit me. We see each other as often as we can. We’re gonna make it work.”

Starstruck Fight It Out With ‘Team’ T-Shirts