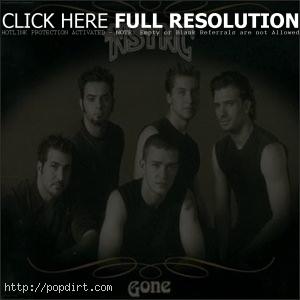 I saw Gone today on Musique Plus! It’s a very pretty video, I like it a lot, except that it’s Justin, Justin, Justin all the time. That really annoyed me, but “artistically” speaking, it’s a beautiful vid. I really liked that it’s slow, in the sense that there aren’t 300 images per minutes like there were on Pop. You can appreciate each image, each cut. It’s b/w, but I guess everyone know that by now.

It starts with this Charlie Chaplin-like scene. Justin, of course, is dressed as Charlie Chaplin. Chris is dressed like an old-time cop and Lance is dressed like a 1920 school boy. They are all dancing like morons. The girl is dancing too, although she doesn’t look as stupid as the guys do. Then the non-Justin guys “disappear” and Justin and girl are alone on the couch. Justin gives her flower, then he pretends to stretch his arm behind her but ends up falling behind her. Funny. Then Justin and the girl kind of accidentally kiss and they both look all surprised. End of the Chaplin movie.

First verse – It’s Justin alone in a room with no furniture but a bench (think Titus). I think it’s supposed to be an empty apartment. He’s wearing a sleeveless shirt and is barefoot. Then the part was it something I said to make you turn away is Justin and girl and the nail painting part. She tosses him the nail polish bottle and they both laugh. During that part we still see bits of Justin in the empty apartment. At one point he’s sitting on a bed but there’s no sheets, just a mattress.

Then the chorus. The entire group re-appear for a few seconds. They pan from right to left once then cut to Justin and the girl and the toenail. He’s painting her toe now. It looks complicated. Close up of JC and Chris. Then back to Justin, he’s done painting the toenail, he’s all “Oh, yeah!”, so we can assume he’s done a good job. Back to the entire group, they pan from left to right, close up of Justin, close up of Lance and Joey. Close up of the girl laughing at Justin’s toenail painting adventure. End of chorus.

During the second verse there’s a party. It’s the girl’s birthday. All the non-Justin guys are there, along with Justin and the girl and some of her friends. We see Justin dancing with his girl, Lance with some blond chick. Then Justin puts his party hat on his face and everybody points and laugh. Then Lance dance with Justin’s girl (what’s with Lance and Justin’s love interests? Down boy!), JC and Joey and Chris are shouting at something, JC and Joey are holding hands (?). More shots of Justin in empty apartment. Back to the party, they’re filming each other. Then Justin brings the small, small birthday cake with one of those sparkling candles on top. JC tries to blow it. Close up of the girl looking very happy. More shots of Justin in the empty apartment. He’s opened the fridge, but it’s empty as well. He closes it and slumps down against it. Back to the party, the girl puts some cake icing on Justin’s nose. Cue empty apartment. Then a very (very) chaste kiss.

Second chorus. All the non-Justin guys in a staircase. JC looks mighty pissed. Then we see the girl putting on lip gloss looking confused about something. Justin puts a necklace on her and they look very happy and couple-y. He caresses her face and kisses her neck. Of course through the entire chorus there are still scenes from the empty apartment.

Then it’s the bridge. Justin runs towards the girl, they roll around in the grass, he’s carrying her on his back. We also see Justin alone in the same backyard. There are a lot of clouds in the sky. And for a short while the non-Justin guys are there too. But of course Justin’s in the middle in front of them. Then Justin and the girl are making out against a wall, I think in the apartment hallway.

Then we see Justin in the empty apartment with the Charlie Chaplin movie playing next to him (I think he’s supposed to be thinking about it). Scene of the Chaplin movie: they’re all (that includes non-Justin guys) dancing one behind another holding the waist of the one in front. I know there’s a name for that thing but I can’t remember right now. Then Justin in the empty apartment fades and we only see the Chaplin movie. The girl is fixing Justin’s hat, then she’s picking petals off the flower Justin gave her at the beginning of the video (“he loves me, he loves me not” style). Then she holds the petal-less flower close to her heart and gets a dreamy look on her face. The End.

My opinion: Very beautiful video, but not for ‘N Sync. Someone who doesn’t know ‘N Sync would think it’s a solo artist with background singers. This is a dream for Justin-only fans, but for fans of the group or fan of non-Justin guys, it’s not great.