On The Set Of ‘4 Minutes’ With Madonna And Justin Timberlake

‘Entertainment Tonight’ has footage from Warner Bros. on the set of Madonna’s ‘4 Minutes’ video, joined by former *NSYNC star Justin Timberlake. The clip features Madonna talking about how she and Justin are different, Jamie King talking about the choreography, Justin bragging about his knowing the hip phrases, and Madonna describing the video. The video at ETOnline.com has since been removed.

Hillary Clinton Would Be Honored To Be Related To Madonna, Jolie

April 18, 2008 – New York Senator Hillary Clinton has weighed in on the news that Angelina Jolie and Madonna are reportedly two of her distant cousins. “I have no idea whether there is any truth to it or not, but they’re both strong independent women,” she told ‘Access Hollywood’ Friday. “They also have been very quick to give back to charities and humanitarian causes, so it would be an honor to be related to them.”

April 18, 2008 – Madonna was joined in the studio by Justin Timberlake and Timbaland while creating her latest album ‘Hard Candy’, and the Material Girl spoke with Artisan News Service about her latest project. “Well I’ve never been doubled teamed in the studio,” Madonna said. “I usually only collaborate with only one person at a time. There’s usually only one person I have to sort of volley with. So to be suddenly in the studio with two very, very big personalities who have very strong opinions… It was a challenged. It was different. It was new.” Watch the segment at YouTube. 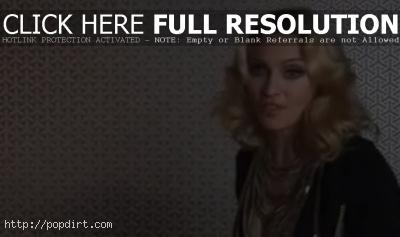 Madonna checked in with a video clip on her YouTube channel promoting the release of her new album ‘Hard Candy’ ahead of its April 29th release.

The Material Girl is seen vacuuming on the set of her new video, complaining about how “everyone’s fu**ed off, and I’ve got to do all the cleanup work myself… What else is new?” She added, “A woman’s work is never done. So all of you people out there who are making videos to my single ‘4 Minutes’, keep up the good work. Nice job. Nice one, but you’ve got to clean up after yourself, alright? Cleanliness is next to godliness.”