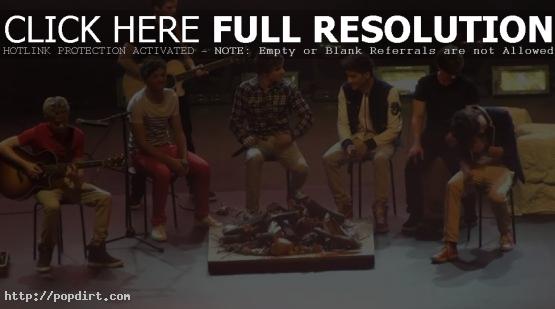 Niall Horan, Zayn Malik, Liam Payne, Harry Styles and Louis Tomlinson of One Direction sat down for an interview with the Hot 30 Countdown during their visit to Australia. The boyband discussed how well they’ve been received by fans in Australia, getting a day off while there, their fans being like seagulls, the 2013 tour and Harry’s reaction to Rihanna saying he’s the cutest member of the group.

On their reception in Australia, Harry said:

It’s been absolutely amazing. We had no idea how crazy it was down here, and we’ve had great fun since we’ve been here.

On whether the trip has been like a holiday, Harry said:

I think we’ve been on the road now for nearly ten weeks, so I think it was a rare day off, so we did have a bit of fun, but we work very hard, so we’re back to work.

On Hot 30 calling their fans seagulls because of their screams, Harry said:

We feel like we owe a bit more respect to our fans than to call them seagulls.

So we’re doing a big tour in 2013. We’re coming back over here. We’re going all around Australia and doing the big arenas out here and there’s lots of seats to fill so stay tuned for details and tickets on our web site.