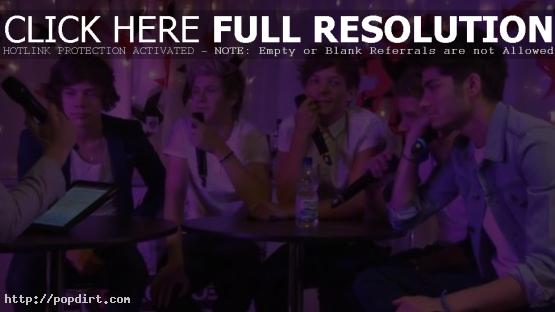 One Direction spoke with Key 103 host Alex James during an appearance in Manchester, where Niall Horan, Zayn Malik, Liam Payne, Harry Styles and Louis Tomlinson talked about the support they get in Manchester, Niall’s recent paparazzi attention received in Spain on the beach, talk of a collaboration with Justin Bieber on the new album, where they see themselves 2 years from now, loving Australia, Zayn’s tattoo plans and more.

On the Manchester crowd, Harry Styles said, “I think that they’re always loud. I think that whenever people come here, they come for a good time and you can tell that with the crowd.”

On Niall Horan’s visit to Spain where he was photographed with girls in bikinis, he said, “You can’t talk to anyone anymore without being lined up with them.”

As for reports of a Justin Bieber collaboration, Louis Tomlinson said, “There’s actually been no talks between either of us actually. It’s just a little story that the press has stirred up.” Asked if there were any collaborations being set up for the next album, he said, “Not as of yet. We’d like to have some on the album, but who knows.”

On where they see themselves two years from now on the two year anniversary of their formation, Harry said, “I think every time we get asked this question, it’s literally impossible to answer. I think if someone asked us two years ago if we thought where we’d be now, we’d have not said this, so I think we’ll have to see what happens.”

As for their favorite spot outside of home, Liam Payne said, “Australia is a great place. We used to get up in the morning, go surfing. We went on a boat ride around the harbor and stuff. It was so relaxing. It was so nice. The way of life over there is so different.”