One Direction Discuss Fan Dedication, Getting Along & Taking Advice 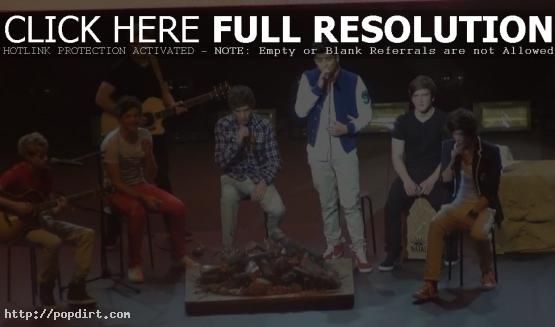 Niall Horan, Zayn Malik, Liam Payne, Harry Styles and Louis Tomlinson from One Direction chatted with ‘Sunrise’ co-anchors Kochie and Mel. The boybnad talked about their meteoric rise since they auditioned for ‘The X Factor’, dealing with screaming girls, what they think about the dedication of their fans, being compared to the Beatles, Zayn getting photographed shirtless, getting along after being put together by Simon Cowell and advice they’ve gotten from Simon about keeping grounded.

On how they cope with thousands of screaming girls wherever they go, Harry said:

On fans’ willingness to wait out in the cold for more than a day to see them, Louis said:

I think it just shows how incredibly dedicated our fans are, and it’s just amazing for us. We are doing something that we love and to be appreciated for that is amazing. All I would say is we want people to stay safe and don’t take any risks.

On whether their family remind them they’re enjoying popularity that rivals the Beatles or the Spice Girls, Niall said:

On Zayn taking his shirt off for the girls the other day in his hotel room, he said:

You know that was completely unintentional. I literally just went to close my blinds and somebody got a good picture. I don’t really understand how that happened. I’m not one to show off the body. I’m not too comfortable.

On how they’ve managed to get along despite being put together by Simon Cowell:

I think we’re very lucky for how we do get on. I think it would’ve been very easy to have someone in the group cause a lot of arguments and who everyone didn’t get on with. I think it shows how good friends we are. The fact that even after we’ve come home from a full day’s work and we’ve been together the whole time, or even when we have holidays, we still spend time together. We still choose to go out and do stuff together. So I think that proves how good friends we are.

On advice Simon and others around them have given to have them keep things in perspective, Louis said:

As far as keeping grounded, we kind of do that with each other. If anyone is stepping out of line, they’ll get a bit of a slap across the head. As far as advice, Simon always told us to be the band that you want to be, which is great for us. We try to be as normal and as much ourselves as we can.