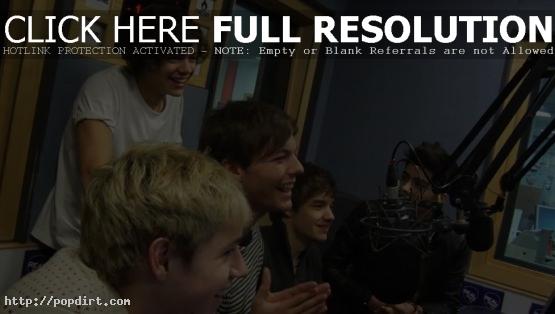 One Direction chat to Two Girls and a Guy about their brand new single ‘One Thing’, the accompanying video, merchandise, what they got up to over Christmas and New Year, resolutions, still pinching themselves after performing, and more.

On their holidays, Harry stated:

We just had like nice quiet family Christmases. It was really nice. We’d been away from home for quite an extended period of time.

We had a big, big house party at Harry’s place. Big. About 80 people. There was a pretty good ratio actually (of guys and girls). We dabbled in some Scotch.

On their new single, Liam said:

The new single is called ‘One Thing’. We really, really love the song. It’s the song we’ve wanted to be the single for a long time. It’s just a song about a girl who has got that special thing that you really like but you just can’t put your finger on it.

On topping their success in 2011, Louis said:

If we could have a year that compares anywhere near as close this year as last year then I think we’ll be very, very happy boys.

On their enthusiasm after every performance, Harry said:

I think that’s the exact feeling. When we finish a show because we’re just like normal guys, we’re not from stage school or anything like that we kind of look and think we’ve just put this show on. It’s so strange that us five boys have put shows on and had fans there. It’s really surreal.