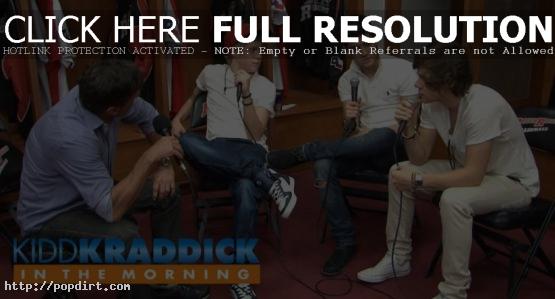 Kidd Kraddick In The Morning was backstage with One Direction members Niall Horan, Liam Payne, Zayn Malik, Harry Styles and Louis Tomlinson for an interview. The boyband discussed their celebrity crushes, if they feel welcomed in America, what it was like to beat out Adele for a Brit Award, and more.

I was told the Kardashian girls were our fans so I decided to Tweet Khloe (and invite them to the show). They’re all very hot.

That prompted Kidd to call Khloe up and they had a conversation.

I think that obviously we’re not from here, so for us to come over here and for us to come over and just be welcomed by everyone. Everyone’s been so nice and we’re very grateful. The reaction has been more than anything we could have asked for. The fans have been absolutely amazing.

On being so polished while performing on television, Niall said:

On Niall being the one guy from Ireland:

We always spend so much time away from England, and when they go back to London it’s kind of like their country. But I’m always away because I live in London as it is.

On beating out Adele at the Brits, Harry said:

It’s just like so strange. She is literally in terms of music, the last year she could just do no wrong. The album is amazing. Obviously being number one for so long just shows how incredible it was.