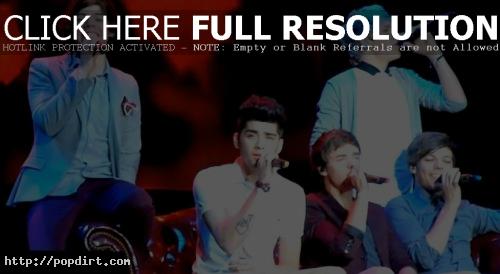 Niall Horan, Zayn Malik, Liam Payne, Harry Styles and Louis Tomlinson of One Direction sat down for an interview with Marc Malkin of E! recently. The boys talked about what to expect with the new album, all the talk about a collaboration with Justin Bieber, if they’d be up for mentoring future ‘X Factor’ hopefuls, being a big part of the MTV Video Music Awards and celebrity crushes, which led to a focus on Demi “Tomato” Lovato.

“I think there will be some surprises on there for some people,” Harry said about their new album. “I think it was important to us that we made the second album better than the first album. So far we think it is. We’ve worked really hard on it and we’re very proud of it so far. Hopefully the fans like it and people enjoy it.”

As for whether they would think about mentoring future ‘X Factor’ contestants, Louis said, “We don’t really feel like we’re actually in a position to be giving strong advice. We feel like we’ve blagged it together anyways.”