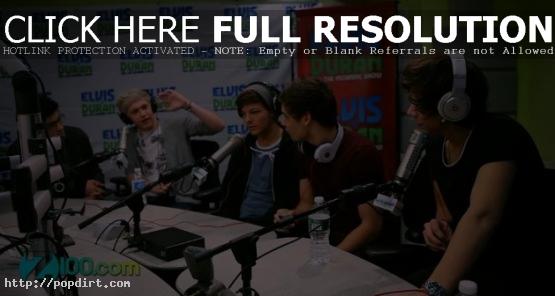 Niall Horan, Zayn Malik, Liam Payne, Harry Styles and Louis Tomlinson of One Direction stopped by to chat with Elvis Duran and the Morning Show the other day. The boyband talked about being greeted everywhere by thousands of screaming girls, how they put up with Niall’s farting, their rapid rise to fame, what makes them successful, how they view the quality of their music, their dream collaboration with Bruno Mars, if they date their fans, how they broke a bowling lane here in New York and more.

Yeah, I miss home a bit. This has been the longest we’ve been away from home. We still have to tour Australia

On Niall’s farting problem on the tour bus, the guys said:

Harry: Well Niall sits in the front so he can open the window.
Louis: He’s not that courteous.
Liam: He won’t even tell you, but after he’s done it, he won’t even move.
Harry: He doesn’t even flinch. It’ll be like pffftt…

On fighting over girls, Harry said:

We don’t really. Some of us have similar tastes (in women), but we don’t really fight. I like a girl who has a good sense of humor. Fun.

I don’t really think it’s a thing or not whether they’re a fan or not, whether you’d date them. It’s whether they are nice, nice looking, good person.

Adjusting to their rapid rise to fame, Louis said:

I think everything is pretty surreal to us and we’re just enjoying the ride.

On besting Adele at the Brits, Liam said:

On what one thing makes them so successful, Harry said:

I think in terms of what we are, we don’t really know. I think what people like is we don’t have to try to get on, we just get on quite naturally. We’re like the kind of boys you go to school with. We’re the guys that would pick up the bras that would get thrown on stage. We’re not really completely clean cut… I think we’re quite lucky with how our fans are, because our fans have made it so we feel completely comfortable being ourselves whatever we’re doing.

On the quality of their music, Liam said:

I think we’re quite happy with how the album came out. We took a lot of time over it because we wanted to make sure we had the write sound and we didn’t want to just dive in and get a quick record out. We wanted to make sure we got a good record out, so that’s kind of where ‘What Makes You Beautiful’ came. We searched around for that song. We love our album, it’s fast songs, slow songs, mid-tempo songs. There’s something on there for everyone. You name it.