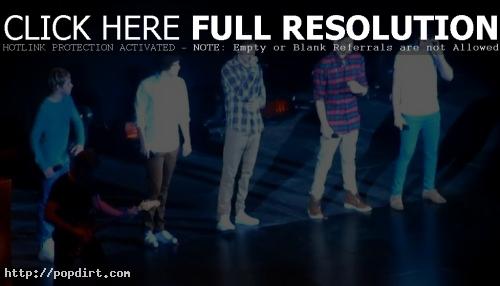 Sam Kirk of Rother FM in Rotherham, England caught up with Niall Horan, Zayn Malik, Liam Payne, Harry Styles and Louis Tomlinson of One Direction recently. The boys talked about their Brit award, how the tour is going, their tour with Big Time Rush in America, how fans from around the world have headed to the UK to see them perform and they wrapped up with a round of quick fire questions.

On the tour, Liam said:

It’s been fantastic so far. We’re over halfway now so we’re kind of in the swing of things now. It’s been great.

The fact that we haven’t really been over and done anything much there and whenever we go over there’s fans at the hotel and airport. Some of them travel a really long way. It’s going to be great for us to go over and meet some more of them and go around a bit more. We only go over to one place whenever we go over, so it will be nice to travel the country a bit more.

On fans travelling internationally to watch them in the UK, Liam said:

The interview audio at rotherfm.co.uk has since been removed..