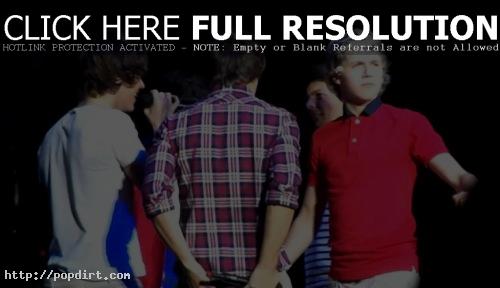 Niall Horan, Zayn Malik, Liam Payne, Harry Styles and Louis Tomlinson of One Direction spoke with The Paul Foster Breakfast Show at 96.9 Viking FM in East Yorkshire, England a while back. The boys talked about the opening week numbers for their ‘Up All Night’ debut LP, not seeing much of the judges besides Simon Cowell since the show, being inside Simon’s luxury home and how a fan got their attention thanks to a maxi pad stuck to their tour bus.

On their album’s first week sales being the biggest of 2011 in the UK, Harry said:

Especially coming from ‘The X Factor’, it gets a lot of bad press. It’s important for us to show what we can do, so it’s a big and very good achievement that we feel we’ve done with the album and feel happy that people are appreciating what we’re doing.

On their debut album:

It’s very similar to the single. That was the benchmark for us and we just kind of based it around that, but there’s some interesting stuff for everyone I think.

On staying in touch with the judges, Louis said:

Well Simon obviously makes the last call on absolutely everything we do, so he has a massive input on us and our record. But the other judges, not really. I went to watch ‘The X Factor’ auditions earlier this year, so I saw Louis (Walsh) then, but not really had time to see any of them.

On the inside of Simon’s home, Louis joked:

We just found as many expensive things as we could, and they’ve actually been on eBay and sold.

On how a sanitary towel (maxi pad) was the strangest thing a fan sent them:

It had the Twitter name on them and was stuck to the window. Maybe they ran out of paper so they thought they could write on that. It did grab our attention clearly, because we’re talking about it right now.