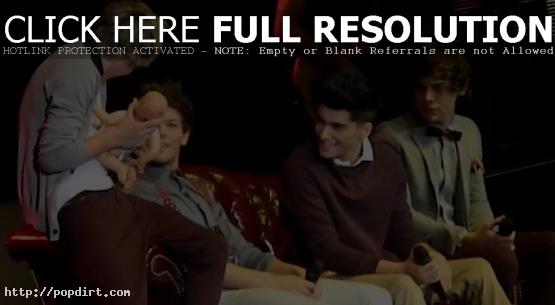 Niall Horan, Zayn Malik, Liam Payne, Harry Styles and Louis Tomlinson of One Direction visited 96.9 Northsound 1 for an interview with Greigsy at Breakfast. The boyband discussed the new season of ‘The X Factor’, who they’d like to have as a mentor if they were competing in the new season, not winning the show, what they’ve been doing since the show, Louis getting pulled over in America shooting the music video, viewing McFly as role models, and a report that linked Niall to Gillian McKeith’s daughter.

Louis on what’s going through their minds during the winner reveal:

You just focus on everything that Dylan McDermott is saying honestly. Nothing else goes through your mind, you just anticipate and wait for the answer.

Louis on not winning:

As far as we were concerned, we were always gonna stay a band. As far as the record contract goes, Simon (Cowell) told us at the very start there’s no guarantees. Just because we had a fantastic fan base on ‘The X Factor’ that supported us throughout, there was no certainty that we were gonna have a record deal.

Harry on what they’ve been up to since the show:

We’ve been recording our album. Obviously it includes recording our single. We shot the music video which was a lot of fun and premieres today on Vevo.

On Louis getting pulled over shooting the video for speeding:

Well the guy was, well I wouldn’t say very nice. But he was okay. They just don’t take any nonsense over there. I was trying to have a laugh but he wasn’t really playing. They look at you and say, ‘I got a gun and I’m not afraid to use it.’

It’s a complete different world out there (in America). It’s wicked, but a bit strange as well.

Those guys are ultimate role models for us to be honest. They’ve been a band for about 8 years now. Actually I saw them at their very first gig. I went to see Busted live and they supported Busted.

Niall on dealing with gossip in the papers like a report he was dating Gillian McKeith’s daughter:

Basically the story there was me and Harry got in a picture with her and her sister, and I don’t know whoever sold the story cropped me and her and it got in the paper that we were together so I had to say no it’s not true. What you do is you don’t read it. I found out by someone telling me, but I never read it. I just got texted on it.

The interview audio at northsound1.com has since been removed.

One thought on “One Direction On American Cops, Niall Linked To Gillian McKeith’s Daughter”