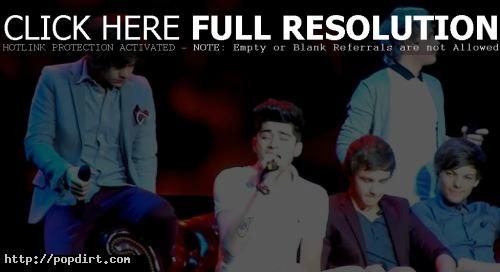 Niall Horan, Zayn Malik, Liam Payne, Harry Styles and Louis Tomlinson of One Direction caught up with Richard Wilkins of Nine’s ‘Current Affair’ at the convention center in Brisbane, Australia a while back. The boyband talked about Australia, how they enjoyed surfing and seeing koalas, what to expect from their arena tour, how they may change by the time they returned in September 2013, if Harry might be looking for a wife by then, and a message they had for their Aussie fan base.

“It’s been amazing since we’ve been in Australia,” Harry said about the country. “It’s a beautiful country.”

As for a highlight of the visit, Louis said, “I love surfing. Me and (Liam) have been smashing out there surfing.” While Zayn said, “I think for me the best thing was the gig we did in Sydney. It was amazing. The reaction that we got was incredible.” For his part, Harry said, “I held a koala. Glued on my t-shirt.”

As for what fans can expect from the arena tour, Liam said, “Just a lot bigger than this tour. Obviously there’s a lot more seats so we’re gonna make the production as big as possible and get people coming to the shows.” Louis added, “We’ll be playing the new album as well.”

Asked if the next time he’ll be back in 18 months if he’ll be looking for a wife, Harry said, “I don’t know. It’s an interesting question. I’m not sure. I’m still young, but who knows. We’ll see.”

As for how their act would change in a year and a half, Harry said, “I think we’ll have gotten a little bit taller” before Liam got more serious and said, “I think we just want to make edgy music. Guitars and make the music sound live.”

To close up the interview, Liam had the following message to Australia: “I think we just want to say a massive thank you, because ever since we touched down you guys made us feel so welcome here and even before then buying all our stuff, buying our CD’s and enjoying our music.”