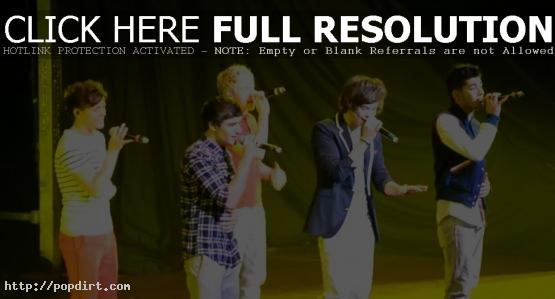 Niall Horan, Zayn Malik, Liam Payne, Harry Styles and Louis Tomlinson of One Direction visited with Tunigo during the boyband’s visit to Stockholm, Sweden. They talked about how popular they’ve suddenly become, what it feels like to have girls wait overnight just to meet them, what they miss about not being normal teenagers, who they’d like to have dinner with dead or alive, and the most memorable thing that’s happened to them.

Liam on the “boyband” label and being huge:

I think it’s been a really good week for us actually because we got the #1 single. The first one in the UK, so that was amazing. It went #1 here as well and our tour has sold out, so everything has just been going mad for us at the moment, it’s amazing.

Liam on what comes to their mind when girls sleep overnight to meet them:

We’ve been to Stockholm now three or four times, and the fan reception out here is always amazing. They were waiting at the airport. They stood outside our hotel all day or out to the studio, but to hear them sleeping out waiting just to see us is amazing.

Louis on what they miss the most not being normal teenagers:

Seeing family and friends as often as we did before this, but everything that we do is great and it’s massively exciting, but sometimes you just miss your mom a little bit.

Niall on who he’d like to have dinner with dead or alive:

Frank Sinatra, just because I always wanted to live in those times where it was just cigars and playing cards were on the table. You know, the whole Rat Pack thing, and he’s a legend.

Louis on the most memorable thing they’ve experienced:

For me performing on stage with Robbie Williams during ‘X Factor’ was unbelievable.

Harry on the most memorable thing they’ve experienced:

Mine is making music videos, they’ve been really cool to me. I think it’s like a big reality check because a lot of the time when we’re doing interviews and stuff it’s all really quick, really fast pace. You miss out loads of bits, but when you do a music video, it’s really weird to even think you’re doing a music video.