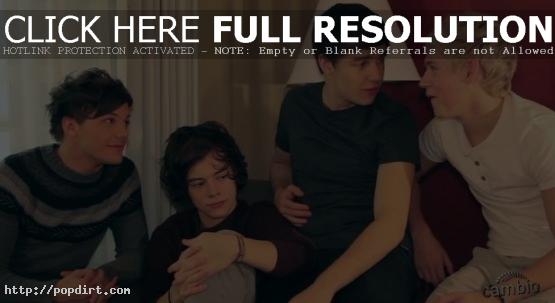 Cambio caught up with One Direction, where Niall Horan, Liam Payne, Harry Styles and Louis Tomlinson asked each other a series of questions about songs they sing in the shower, songs that pump them up before performing a show, songs to slow-dance to, and a what they’d like to cross off their bucket list.

The one song they belt out in the shower:

Niall: ‘Good Feeling’ by Flo Rida
Harry: Mine is ‘Who’s Loving You’ by Michael Jackson
Louis: Mine’s ‘Creep’ by Radiohead
Liam: and mine is ‘All Back’ Chris Brown

What song pumps them up before a gig:

Niall: Recently I’ve been listening to that song ‘Wild One’
Liam: I’m gonna go with Flo Rida’s ‘Good Feeling’
Harry: ‘Eye of the Tiger’ (Survivor) or ‘More Than A Feeling’ by Busted

Harry: I recently heard a song that I wouldn’t mind slow-dancing to. It’s a cover of the Pixies song ‘Where is My Mind’ by Sunday Girl.
Liam: R. Kelly ‘If I Could Turn Back the Hands of Time’. It’s got a nice slow beat to it you can sway to.
Niall: ‘Total Eclipse of The Heart’ (Bonnie Tyler)
Louis: I’m gonna go with ‘Look After You’ by The Fray

Watch the discussion at aol.com.

«Louis Tomlinson Of One Direction On Touring, New Album & Getting A Dog
Justin Bieber Discusses His Christmas Album ‘Under The Mistletoe’»