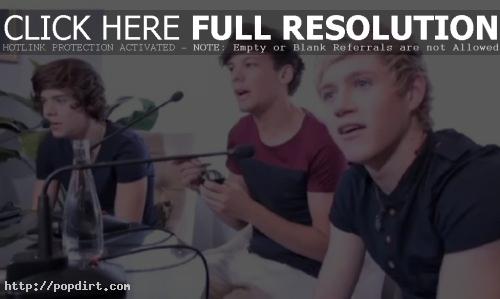 Amber and Stu of More FM caught up with Niall Horan, Harry Styles and Louis Tomlinson from One Direction while on tour in New Zealand. The guys talked about visiting a bar in town called The Ivy, who they’d make a hologram out of to join them on stage (Celine Dion, Frank Sinatra and Elvis), questioning themselves in the future and how everyone got along on ‘The X Factor’.

I was always a big swing fan when growing up so I listed to a lot of the Rat Pack when I was a kid.

On being able to question himself in the future, Louis said:

I’m just really intrigued to see where this ends up, because we have done so much in the last 18 months. It’s gonna be interesting to see where we stand in 2, 3 years time.

On whether people competing on ‘The X Factor’ got along, Niall said:

At the end of the day, why fight with everyone else? It’s the judges that are going to make the decision.

Watch the interview at morefm.co.nz.