One Direction On Staying Grounded & Keeping It Real 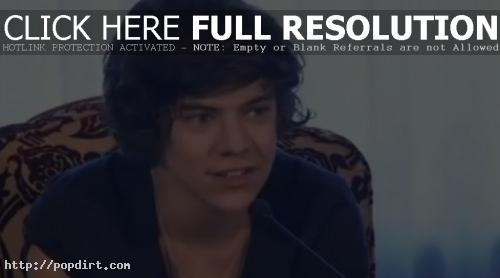 Close Up’s Mark Sainsbury interviewed Niall Horan, Zayn Malik, Liam Payne, Harry Styles and Louis Tomlinson of One Direction on their New Zealand visit. The boyband talked about those who questioned whether they really get along, how far they can go with the pop group, staying grounded despite all the adoration and more.

On those who question their authenticity having been put together for a television show:

Louis: You don’t have to spend a day with us to realize our relationship isn’t contrived, and nothing about the band really is other than the fact that we were put together on ‘The X Factor’. We are as real as possible. We’re not trying to in sync dance and we don’t all dress the same. It’s not like one of those boybands from the past. We’re just trying to do what we want to do really.

Harry: I think you can tell a bit from interviews that we’ve done. Compared to a lot of interviews people do we’re very real.

On how long they realistically can go on for, Liam said:

I think it’s really difficult to tell because we weren’t doing what we’re doing now this time two years ago. We weren’t expected to be in this position now so I think we’re really happy to have gotten as far as we’ve got but I think we want to take it further. As long as we work hard and keep making good music, that can happen.

On keeping their feet on the ground despite fans screaming out their window wherever they go, Zayn said:

I think we’re quite lucky in terms of the fact that we have each other to keep each other grounded. We have four of the people going through exactly the same thing we’re going through. Just having friends and family they kind of keep us grounded. I think that we’re just quite lucky that we’ve come from supportive families and we have good friends around us as well.

On other bands that find success and then it implodes, Louis said:

One thought on “One Direction On Staying Grounded & Keeping It Real”