One Direction On The Best & Worst Of Fame, Cannibalism Conundrum 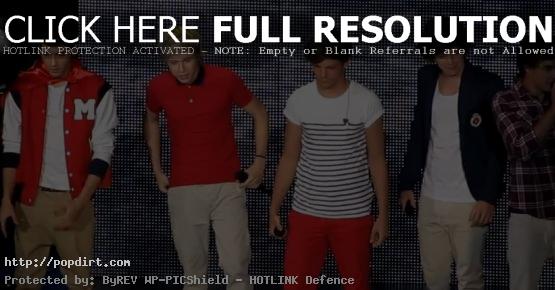 Katie of 93.3 FLZ got the chance to interview One Direction before their concert in Tampa, Florida on June 29th. Harry Styles, Niall Horan and Louis Tomlinson talked about crazy fan stories, the best and worst thing about fame, underwear choice, who they’d eat first if stuck on an island, and if they were a chair, which celebrity would they let sit on them. They also played a game called green light go or pump the brakes.

Someone was hidden in a bin once. In a trash can. They were in there for about an hour I think.

Harry on favorite thing about fame:

I think favorite is you get to travel the world and you have all these amazing opportunities to meet people you’d probably never meet and go to places you’d never get to go, and a lot of the times when you get days off you get to do a lot of cool stuff.

Niall on the least favorite thing about fame:

I think we’d all agree on this one. Not being able to go home as much as we obviously would like to and see our friends and family. I think it’s like going from spending every day together with your friends and family and then having like last year I spent maybe 30 days at home. So it’s a big difference from 365 to zero.

On which group member they’d eat first if stuck on an island:

Harry: I feel like Liam [Payne] would have the most like meat on him.
Niall: Actually if I wanted to eat healthy I’d eat (Harry).

What celebrity they’d let sit on them if they were a chair: