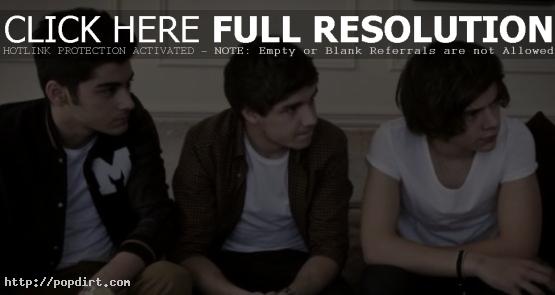 MSN Canada asks One Direction fans to challenge group members members Zayn Malik, Liam Payne and Harry Styles to a game of truth or dare after posing a few questions of the trio. The boys were asked about what they like about Canada, if the schedule ever gets tiring, how they figure out who sings different parts of their songs, and their song selection. Liam took the dare to make up a short rap about Harry. Next up was Harry, who took a dare to touch his nose with his tongue. Zayn also went for the dare, where he was challenged to switch clothes with the person to his right, who happened to be some random guy in the room.

On if it ever gets tiring, Liam said:

Not so much that side of it, but kind of the work. We work very hard and we’re very busy all the time, so that gets tiring, but the fans are fun.

On who chooses who sings what parts of a song, Harry said:

We kind of sing loads of bits and see what fits best in the song and what works in the whole thing.

We just kind of go with what we like actually. We kind of knew what we wanted early on. We wanted to go with this more rocky sound and then loads of songs came in. They were amazing. We recorded over 80 songs for the album, and we had to choose 12 tracks out of 80, so it was a really, really tough choice. Some of the tracks are that I like may not have made the album. Some of the tracks (Harry) liked might not have made the album, so that’s the most difficult part of it, choosing the songs (that make it), because you’ve heard them so much so it’s like, which ones do we want now?

Check out the interviews and dares below.