One Direction Shoot ‘Kiss You’ Video At Ellstree Studios

One Direction are out with behind the scenes highlights from the making of their ‘Kiss You’ music video. The track is off Harry Styles, Zayn Malik, Niall Horan, Liam Payne and Louis Tomlinson’s second studio album ‘Take Me Home’, released on Columbia Records.

Describing the scene, director Vaughan Arnell said, “Here we are, Ellstree Studios, home of ‘Star Wars’, ‘Indiana Jones’, ‘The Shining’, but more importantly, we’re shooting One Direction here today. We’ve got the surf set here. Over in this corner we’ve got the snow set. Over in this corner we’re doing like a ‘Jailhouse Rock’ set, and straight behind you over there we’re shooting a car scene, and it’s all fake projections in the background. It’s all quite tongue in cheek and we’ve got two days to shoot it, and it’s gonna be chaos.”

Zayn said, “Clearly whoever was in charge of getting the set together didn’t plan on that they were gonna be dealing with five idiots.”

In the passenger seat of a convertible Triumph, Louis said, “I’ve driven in three videos now. The second a broke a Mini Cooper and in ‘Live While We’re Young’ I broke the Jeep. They’re not actually letting me drive this probably for those reasons.” Unfortunately, that didn’t mean something wouldn’t go wrong for the driver this time around. “Early I was lifting up the visor in the car and I lifted it up too quick and slapped myself in the eye,” Niall confessed. “I’ve got a bit of a big eye, so I had to put sunglasses on to make it not look as bad.” 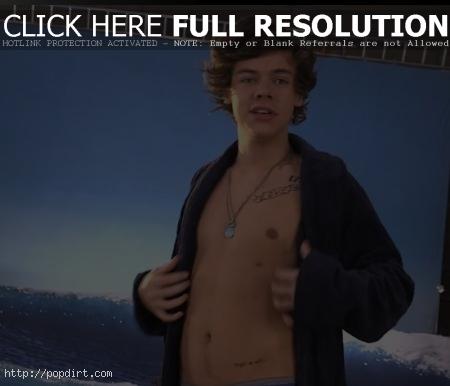 Talking about the following scene, Louis said, “I think what we’re moving onto next, it’s almost like a climbing frame. There’s a fireman’s pole. I might actually want to be a fireman. I could get into this, so I may be able to snag some skills there.”

As for the dance averse boyband showing off their skills in the next scene, Zayn said, “We’re about to re-enact Elvis. None of us even have 20% of the cool that Elvis had, but it should be interesting and funny.”

After wrapping up, Niall said, “Everyone. Every single person. We just want to say a massive thank you for the last couple of days for all of your hard work from everyone that put this together.” Louis added, “And Could I just say I think we’d all agree this has been the most fun we’ve ever had at a video shoot, so thank you so much to everybody!”