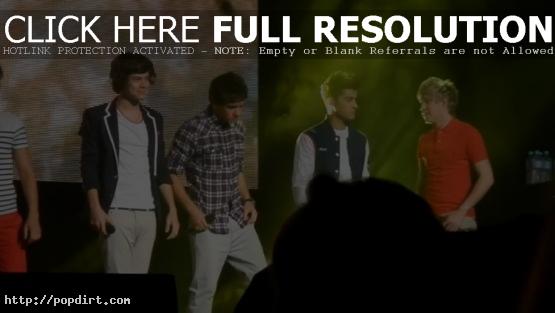 Niall Horan, Zayn Malik, Liam Payne, Harry Styles and Louis Tomlinson of One Direction played a game of Blooms Balloons, where the boyband answered questions while sucking in helium.

Liam on who he’d have play him in a movie about his life:

I dunno, because I like to weight train a little bit. Do a little weightlifting, so I think probably someone like Taylor Lautner or something like that. I don’t know.

Zayn on not having a passport until recently:

Yeah, it’s true. I did not have a passport before One Direction.

Niall on his last text message:

It was my cousin from Australia and he said he was watching our interview on Sunrise.

Harry on celebrating his 18th birthday:

I went out for a bit with my family and me and the boys had some fun.

Louis on the weirdest thing he’s ever eaten:

I’m pretty sure the boys told me to eat some kind of script or something. Some kind of paper. Yeah I swallowed it. It was horrible.