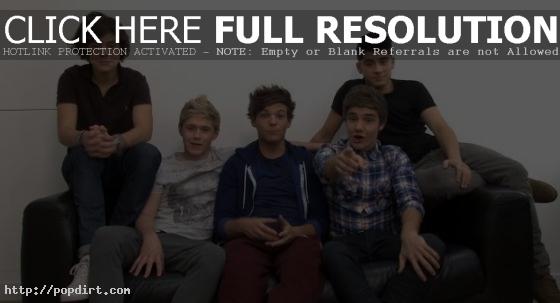 One Direction, minus Liam Payne, joined Sarah Powell when on heat radio recently. Niall Horan, Zayn Malik, Harry Styles and Louis Tomlinson talked about how they can go out in public without getting hassled, if they ever just want a break from it, having a desire to see family and friends while on tour, the best thing about being in the boy band, the reaction they get from girls, their dating status, Katy Perry reportedly having their dolls, their backstage routine, and more.

Asked if they can go anywhere in peace, Harry said, “We love it. We think it’s fun. You know you never expect people to be outside of a hotel when you come out and stuff, but it’s crazy. We’ve had an amazing time this past few years and can’t wait to tour and stuff this year.”

Asked if it ever gets crazy if they just want to go out to dinner, Louis said, “The only time it might become a problem is if everyone knows that you’re going to be at a certain place at a certain time. If you’re just gonna go walk out of your house and go for a walk down the road, go for a jog, go to the local bakery and grab yourself a sausage roll, you can do all of that.”

As for something they wish they could do but can’t, Louis said, “I think sometimes when you’re away on tour, you’d just like to see friends and family more. Sometimes because we’re really, really busy, we don’t often get a chance to play football and do sports that much.”

On the best thing about being in 1D, Harry said, “I think as 18, 19, 20 year old guys, I just don’t think there’s anyone our age that gets to travel the world as much and see all of these amazing places. You go to places you either wouldn’t get a chance to go, or you just wouldn’t think of going to, and you see this amazing stuff. You see stuff you see in movies and it’s just crazy. We love it.”

Asked how they deal with the chaos that comes with the reaction girls have to them, Zayn said, “It’s crazy. If someone said to me before I was in a band, like hysteria, the first thing I’d think is Elvis or the Beatles, so to think that people have that sort of similar reaction to us is so strange, because we’re just normal people but it’s flattering and it’s cool and I wouldn’t trade it for the world.”