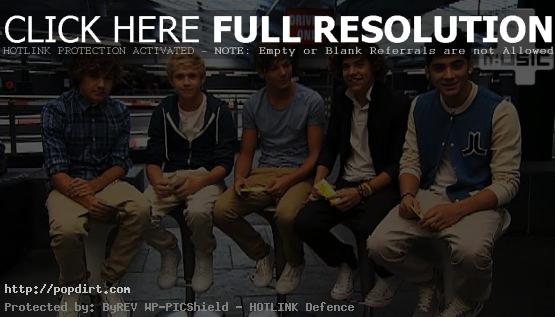 4Music did a Twitter Q&A with Niall Horan, Zayn Malik, Liam Payne, Harry Styles and Louis Tomlinson of One Direction, delivering questions submitted by fans, including what the boyband thinks is the best part of being in a group, Louis going shirtless, Harry’s favorite ‘X Factor’ moment, Zayn singing in the shower and going back or forward in time.

On their favorite part in being in One Direction, Liam said:

On whether Louis is shirtless for the music video for their new single:

I can reveal there is one little scene where we dabble in topless behavior. I left it open to interpretation.

My best moment was singing with Robbie Williams. I thought that was really cool, because he’s like massive. He’s incredible. He’s a really nice man also.

Zayn on what he sings in the shower:

Well I probably sing anything Chris Brown related, so you got ‘With You’, ‘Forever’, ‘Take You Down’.

If Liam would rather go way back or way forward in time:

I actually think that I’d rather go way back, because I’d want what happens to be a bit of a surprise, because it ruins the element of it.