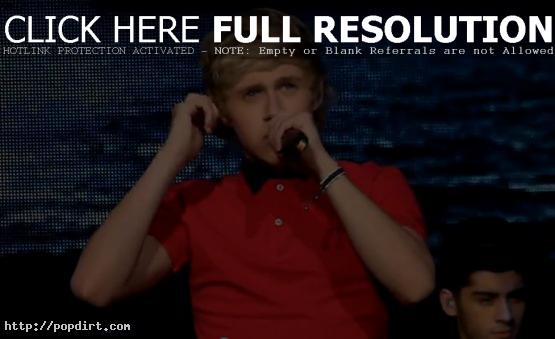 Natalie Pernick got the opportunity to interview Niall Horan of One Direction during the boyband’s concert the other night at the Patriot Center. Nial talked about having a chance to see the sights in Washington, DC, if he’d have a strategy on ‘The Hunger Games’, assumptions that people make about himself and his bandmates, pet peeves, relatable songs for him on their debut album ‘Up All Night’, their view on the group’s boy fans and getting a chance to do songwriting for their second LP.

On sightseeing in DC:

No. We’ve actually played here before on the Big Time Rush tour and we still haven’t seen much of it yet. Maybe soon. Maybe if we get invited back to the White House again maybe we can go see a little bit more of it.

On his strategy to survive ‘The Hunger Games’:

You know what, I’d give up because I’d get hungry too early. I’d probably die straight away.

What people wrongly assume about them:

People may think that we’re not nice people if they didn’t go by first impression, so first impressions are always quite a big thing for people because it could be the once and last time you might meet them in your life, but they might catch you on an off minute. Not everyone can go around smiling all day so celebrities in general people just assume they’re gonna be a bit off but they’re not.

I hate stubborn people who won’t move from their position. You can’t meet them in the middle. It’s always their way or no way.

Most relatable song for him on ‘Up All Night’:

I can relate to a couple… ‘Up All Night’ simply because it’s got us written all over it. When we heard that this is for us definitely, we like to stay up mostly because we can’t sleep. We stay up when we’re back home and party all night. Chill out. We’re teenage guys and we like to do what everyone else does. And maybe ‘One Thing’ because everyone knows that person you can’t put your finger on it.

We want to see more of them. That’s what we came to do. We see them in the crowd and we’re like, ‘This is cool’. Obviously it’s 90% girls, but we want to try to expand to your regular teenage guys…

Songwriting for the new album:

Last week we were in Sweden. That’s where we do a lot of our recording. We recorded ‘What Makes You Beautiful’, ‘One Thing’, ‘I Wish’. Them guys are doing a little bit more of this album and when everyone else is recording we’re writing bits and pieces and came up with this one song that we really, really like. We’re written a couple of songs and we’re trying to do a bit more on this tour when we have a bit of time on the bus.

Watch the interview via cbsradio.com below.