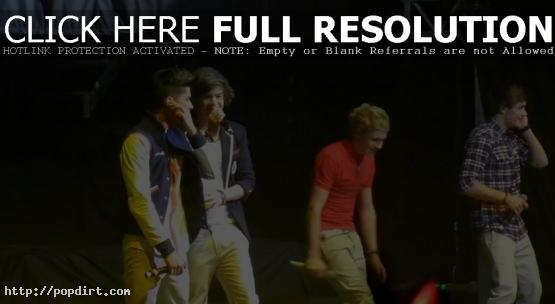 Zayn Malik of One Direction was on the phone with The Edge in New Zealand, where he talked about the rapid global success of the band, how they’ve gained a following in countries that didn’t air ‘The X Factor’, being mentored by Simon Cowell, if any of his bandmates were gay, the money they’re making and what he’s spent some of it on, and more.

On being like a nasty virus taking over the world:

I don’t think that’s a nice way to describe it, but yeah, it’s amazing we’re blown away by the kind of response that we’re getting to the first single, and we’re just massively grateful for all the support that we’re getting and we just want to say a massive thank you.

On being big in countries that didn’t have have ‘The X Factor’:

On how Simon Cowell was to be the group’s mentor:

He was very different to what we thought it was going to be like, because obviously he gets portrayed as this massively scarey figure who is like the head of the music industry. We met him and he’s such a cool, down to earth guy. You can go and talk to him about football and girls and he’s really cool. He has stayed completely faithful to us and he’s took full control of the One Direction campaign and everything and he’s still there making the decisions.

For gay fans of the group, if any members are of similar sexuality:

Sorry for the gay fans, but none of the guys are gay. We like our girls.

On the money coming in:

Listen to the interview at theedge.co.nz.