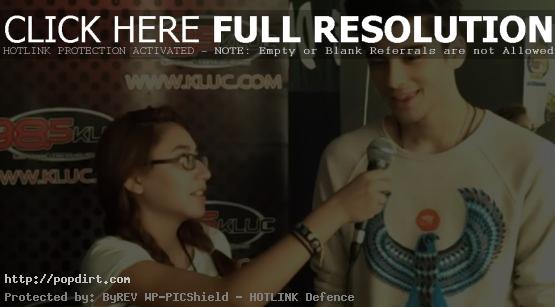 Zayn Malik of One Direction spoke with Albania Guido, who was a KLUC Correspondent contest winner getting a chance to interview the boy band member on June 9th before their Las Vegas show at Planet Hollywood.

“I like Hulk,” Zayn said when asked about his favorite Avenger. “I think because he’s really awkward when he’s Bruce (Banner), and then as soon as he turns into the Hulk, he becomes this massive green monster and he’s really cool.”

Asked if their was a zombie apocalypse, who would be the first in the group to go, Zayn responded, “I think it would be Niall (Horan). We’d have to said Niall.” As for incidents were people on drugs have been eating people, Zayn said, “I don’t think it’s realistic that there is gonna be a zombie apocalypse anytime soon, but if there is, I think Niall’s gonna need saving.”

If a girl asked him to the prom, Zayn said “it depends” whether he’d respond yes. “If she wanted me to take her to prom, then probably I don’t think my girlfriend would be too happy about that,” Zayn explained, adding that he and his girlfriend are “going really well. She’s cool.”

As for how he achieves his hairstyle, Zayn said “a little bit of hairspray and a blow-dryer.”

Posed with a bad breath conundrum and if he’d pick onions or garlic to eat for the rest of his life, Zayn said, “It’s hard actually because I like garlic as well, but onions are my favorite. It’s gotta be onions.”