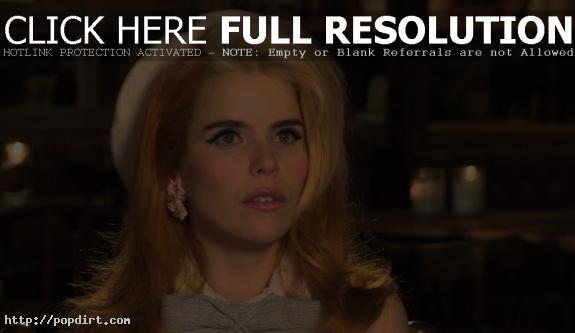 Paloma Faith sat down with VEVO Lift in a influences themed discussion, where the British singer-songwriter talked about her parents influencing her in music early on, being influenced vocally by Etta James and Billie Holiday, making a living performing ‘At Last’, going to her first concert to see The Fugees, having an obsession with film, her favorite directors, and trying to take people to another place with her music.

“I suppose my knowledge of music is quite broad,” Paloma explained. “My father was a jazz fanatic, and sort of played lots of jazz. My mother was really into music from the ’60s, like Motown and soul. I focused so strongly on her, because I think my mom was so obsessed with Bob Dylan. She would buy me books of his lyrics and make me read them. What he was saying and the way he was saying it was like an education. I was sort of saturated with so many types of music. I think it’s definitely influenced my openness and I think you can hear in my records that there’s a lot of quite ecclectic sounds on there.”

Discussing who she looked to vocally, Paloma said, “Some of my great influences vocally are probably Etta James being the first one, and Billie Holiday. I sort of learned to sing by emulating those singers. I never really had singing lessons, I just copied them.”

As for the cover she most enjoys doing, Paloma said, “My favorite song by Etta James to sing is probably ‘At Last’. I’ve sung it so many times and I owe a lot to it because I paid a lot of bills by singing it in rich people’s jazz clubs.”

Paloma talked about how the first concert she attended was The Fugees. “I wasn’t over 18 which you have to be in England to go to the clubs. I got a fake ID so that I could go, and I was so blown away by the closeness to the music. It was tangible. It was exciting. The sound was huge and it was brilliant.”