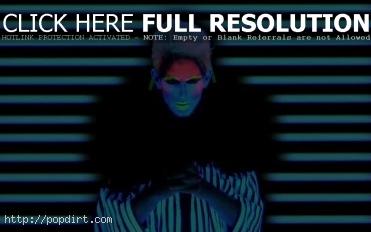 Patrick Wolf is out with the music video to his new single ‘Hard Times’, the second release from the English singer-songwriter’s fourth studio album ‘The Bachelor’, out June 1st on his Bloody Chamber Music label.

Wolf said of the video:

For me this video is my homage to two of my biggest heroes, Elvis Presley and Klaus Nomi. I always wondered what both of those geniuses would be doing if they were both still with us. Elvis and Klaus were some of the greatest radical visionaries the world has ever seen, never forget them. This is my first music video shot outside of the United Kingdom, filmed all on Pier 52, I think, on Manhattan Island, a couple of piers down from the home of Studio 54. The outfit I am wearing was made by my long term collaborator Ada Zanditon out of bin bags from Whitechapel Market in London flown to New York in its own suitcase at great excess baggage cost. It was an absolute mind altering experience working with Ace Norton, This guy is definitely the Michel Gondry of my generation. I cant wait to collaborate with him and his amazing team in the future. Big love to all the dancers, make up artists and performance artists in the video, to Charles Manning for making the costumes for my army and to Marvin for making this all happen for me and my hard times song.