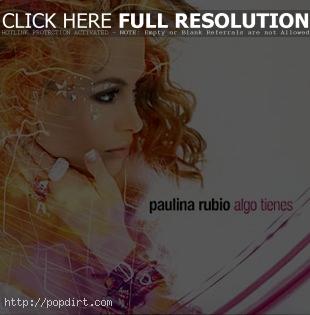 Mexican pop singer Paulina Rubio is out with the video to her new Spanish single ‘Algo Tienes’, where she strips down to nothing but “Caution” tape. Watch it online below.

June 13, 2004 – Paulina Rubio will be live in concert at the San Diego County Fair this June 30th at 7:30PM at the Grandstand Stage. This is an exclusive concert and only date. Her world tour will start next September and will take her throughout the U.S, South America, and Europe.

June 12, 2004 – Paulina Rubio participated in the program ‘La Columna’. The singer did not put herself in contact with ex-boyfriend Ricardo Bofill, which seems to indicate that the separation of both is, this time, definitive.

Paulina Rubio Will Prove You Wrong

CNN Espanol caught up with Paulina Rubio in the process of recording her second English album. “We are just in the first stage, there is a long way to go. But I guarantee this is one will be more mature, more edgy but with the same energy and charisma that is essential in me,” said Paulina. The reporter asked if she was happy with her first English effort ‘Border Girl’. Paulina replied. “I was happy with my album, but as usual the record company got involved too much because it was my first English album. They made me record songs that I did not want to. I wanted to make an album full of new songs, but they wanted to translate my hit singles in English. I don’t know if that was a great idea.”

“Paulina has matured musically. She is writing and producing her music, she is becoming more edgy and working with the top producers that you will never imagine who they are. She’ll will definitively prove everyone wrong,” concluded the reporter.