“Get Neutered—It Didn’t Hurt Clay Aiken,” snips Triumph the Insult Comic Dog in a new PETA ad aimed at the widespread problem of dog and cat overpopulation. The foulmouthed—but lovable—dog-puppet creation of Robert Smigel is best known as a regular guest on Late Night With Conan O’Brien. In his PETA ad, Triumph wears a “post-surgery” Elizabethan collar and chomps on his trademark cigar as he takes aim at the high-ranging American Idol contestant.

Triumph chose to make Clay Aiken the target of his humor in the ad, and PETA didn’t object because Aiken recently told Rolling Stone, “I think cats are Satan. There’s nothing worse to me than a house cat. When I was about 16, I had a kitten and ran over it.”

PETA deals with dozens of cases of cruelty to cats every week and how damaging statements like this can be, with impressionable kids being prone to mimic what their “idols” do. Aiken never responded when PETA wrote to him.

Update: The Chicago Sun-Times reports Clay Aiken is miffed at PETA and wants to take them to court after seeing their new ad campaign featuring Triumph the Insult Comic Dog with the headline, “Get Neutered — It Didn’t Hurt Clay Aiken.” While the publicist for Aiken declined to comment, a source close to the pop star told Bill Zwecker, “Clay is very insulted. … He thinks this is yet another swipe at his sexuality.” 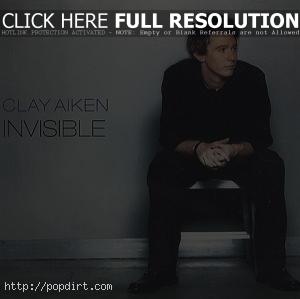 November 11, 2003 – Clay is out with his new video ‘Invisible’. The track is off the ‘American Idol’ season two runner-up’s debut album ‘Measure of a Man’, out now on RCA Records. Watch it via YouTube below.