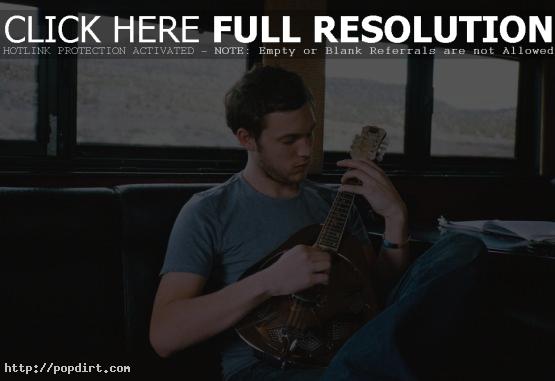 ‘American Idol’ season eleven winner Phillip Phillips stopped by the Z100 studios in New York City to chat with JJ about how the Olympics helped his song his song ‘Home’ become a hit, how the track has different meanings for different people, what it was like behind the scenes on ‘Idol’ interacting with the show’s judges Randy Jackson, Jennifer Lopez and Steven Tyler, and his parents owning a pawn shop.

On the success of ‘Home’, “It’s amazing. I’m so thankful it’s doing so well with people connecting with it and enjoying themselves with it. I’m so thankful the Olympics did use it and it gave it another life. It’s pretty awesome.”

Asked if his family that owns a pawn shop looks like the people on the History Channel show ‘Pawn Stars’, he said, “No, they take in a lot more expensive stuff than we do, but it’s similar I guess.”

Talking about how he learned how to play guitar from his sister’s boyfriend at the time, Phillip said, “I would see him like once a month. Picked up the guitar because I saw him and he taught me the main chords and went from there and just taught myself and listened to music through my karaoke machine and pick it out the best I could and learn all I could from it. He’d come and critique me if I needed it.”

On being there for the flushing out of most of the judges like Steven Tyler, Phillip said, “He’s an amazing guy. He’s got such a good heart and such a nice guy and we had some good talks. All of the rest of them are nice as well.”

Discussing his interaction with the judges off camera, he said, “They would come up and talk, especially Steven and Randy. Jennifer she would when she wasn’t busy. She was working with her album and everything and getting it out there, but she would come and talk to us as well. Steven and I, we had some good talks, and Randy. They’re some great guys.”

Discussing how ‘Home’ can have different meanings for different people like people that are away from home in college, he said, “That’s exactly how I feel about the song or any song. It’s good to have a different meaning towards it. For me I don’t really have one meaning to a song. I might start writing it with a meaning, but in the end it could have a totally different meaning after that. It’s cool to hear how people take the song, and I’ve never heard anybody say that about college and wanting to listen to it in college. That’s cool. That’s a new one.”