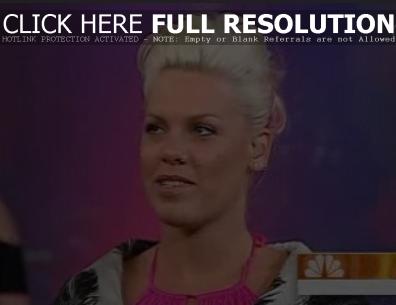 Pink performed her new single ‘Stupid Girls’ from her new album ‘I’m Not Dead’, as part of the Toyota Concert Series on ‘Today’.

On rare meetings with her husband Carey Hart, Pink said, “There’s something to be said for meeting in random hotel rooms.”

On the motivation to write ‘Stupid Girls’, Pink said, “I live in LA, and it’s a conversation I’ve been having with people for a couple of years. Boys and girls, men and women. It’s about mindless consumerism and not contributing anything to the world, and sort of dumbing yourself down to be cute.”

As for the certain girls the song is connected to, like Lindsay Lohan or Paris Hilton, she said, “I don’t think these girls are stupid. I think it’s an act. It’s lucrative these days to act really cute and unchallenging… I’m an option girl. I’m all about choice, and I think there needs to be a little bit more examples of smart and sexy and (making a) contribution.”