Pink ‘Raise Your Glass’ Video Behind The Scenes

Pink is out with behind the scenes footage from her ‘Raise Your Glass’ music video shoot. The song is one of three new tracks from her compilation album ‘Greatest Hits… So Far!!!’

“This is the greatest hits, so I have to give a nod to where I come from,” Pink said of her earlier years. “Ten years ago I had a gun in my back pocket, and I was not happy to see you.”

“If I don’t get jumped wearing this outfit, I won’t be surprised,” Pink said of her bandana and flannel attire. 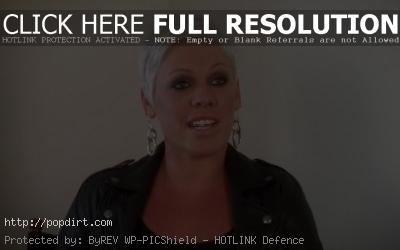 As for the familiar man behind the camera, Pink laughed and said, “It’s me and Dave Meyers fourteenth video together, and you know you can always rely on our mess. It’s a mess. Basically when I was thinking of writing a new song, I sat down and thought a greatest hits album, 10-11 years, I want to write for my fans around the world. To me it’s about being an underdog and about celebrating imperfections and celebrating the fact that we’re dirty little freaks.”

As for getting her guy Carey Hart involved in the video, she explained, “I convinced Carey to do some screaming on this song. It’s the first time he’s ever overcome his shyness to be able to do that, and it was painful. He was adorable, but he was really nervous to do it by himself.”