Praise for Mandy Moore’s ‘Coverage’ Starting To Come In 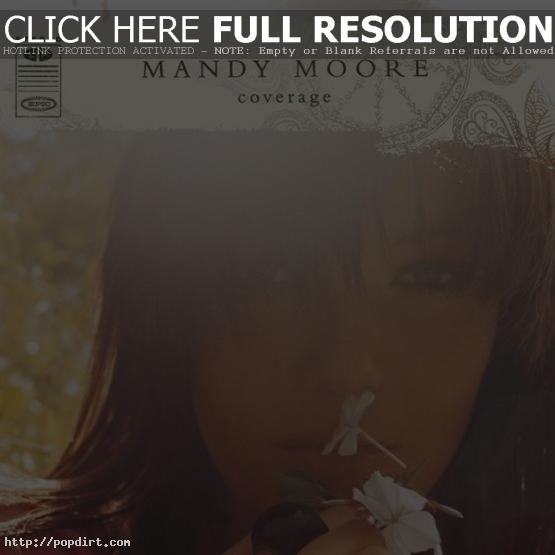 Contributed anonymously: Spin Magazine gave outstanding praise for Mandy Moore’s new album ‘Coverage,’ saying it is “the best collection of other people’s songs since David Bowie’s 1973 classic, Pinups.” Blender Magazine also reviewed ‘Coverage’ and gave it a 4 out of 4 stars rating. The album is due in stores October 21.

“These are big songs, and Moore’s voice fills them out spectacularly without turning [Coverage] into a retro stunt. Moore doesn’t write the songs that make the whole world sing but she knows EXACTLY what to do with them. And that is more than half the battle right there.”
**** (out of four)
– Blender Magazine

October 5, 2003 – The Las Vegas Review Journal reports Mandy Moore was on hand along with boyfriend Andy Roddick and Anna Kournikova at Andre Agassi’s Grand Slam for Children, one of Vegas’ largest all-star galas.

October 2, 2003 – Contributed by Dana933flz: I talked to Mandy today! She is so sweet… She was actually lying in bed when she called me. I got her talking a little about her relationship with Andy Roddick, and she told me what she thinks of Britney showing off her butt!

October 1, 2003 – Contributed anonymously: Last night Mandy sang 3 songs at the Women Rock! concert which will be airing October 23 on the Lifetime channel. Mandy performed her new single “Have A Little Faith In Me”, and performed a duet with Debbie Reynolds singing “Good Morning” and also performed with Debbie Reynolds , Alison Krauss, Bonnie Raitt , Dolly Parton and Mindy Smith, singing ‘Jolene’.

September 22, 2003 – Contributed by Captured: Mandy fan site Captured reports: MG told us about the Untitled Mandy Moore Project that was operating under the working title of ‘First Daughter’ – “Was involved with the project, final title ‘Flirting with Freedom’, US release date is January 7, 2004, and is being produced by Warner Bros., not Fox (The Katie Holmes ‘First Daughter’ is being produced by Fox).”

September 21, 2003 – Mandy listed her 20 greatest songs to download in the October issue of Blender magazine, placing Joan Armatrading in the #1 and #2 spots with ‘Weakness In Me’ and ‘Love & Affection’ respectively. Moore covered Armatrading’s ‘Drop The Pilot’ on her forthcoming ‘Coverage’ album. Moore had Mary J. Blige’s ‘No More Drama’ in the #3 spot and revealed, “I listed to this constantly when I was going through a breakup.” Mandy showed her hip hop side putting 50 Cent in the #8 spot saying, “I’m a bad dancer, but when this song comes on, forget it — I don’t care what I look like.” And #15 on her list is John Mayer’s ”83′: “When I started dating my boyfriend [Andy Roddick], this became our record.”