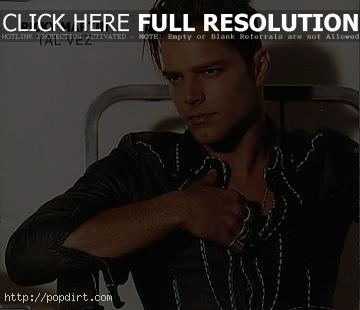 Ricky Martin is currently in Argentina, shooting two videos for two singles from his upcoming Spanish language CD called ‘Almas del Silencio’, which will be release on May 20th. The singles include ‘Tal Vez’ for the Latin American market and ‘Jaleo’ for the European market. Telemundo’s show ‘Cottoreanto’ showed clips from the video shoot. Screen captures were posted on TSARM message board.

Ricky Martin’s new single, ‘Tal Vez’, is going to be played on the radio starting March 25. His new CD is supposed to be released in May. It will be an all Spanish CD, but an all English CD of his is supposed to come out late 2003 or early 2004.

The New York Post reports Ricky Martin was spotted posing for freezing paparazzi outside Da Silvano on Sixth Ave. after an attempt to evade them failed when he jumped in the wrong limo.

January 20, 2003 – Kelly Brook has revealed to The Mirror that she was invited to be arm candy for Ricky Martin. “I’d been raving on and on about him on MTV,” she says, “so his people asked if I’d mind being his walker for a night. The idea was that I’d be seen coming out of a high-profile restaurant with him for the cameras. I was so shocked. Call me naive, but I didn’t really believe till then that sort of thing went on.”

One thought on “Ricky Martin Heats Up Latin Tracks Chart”