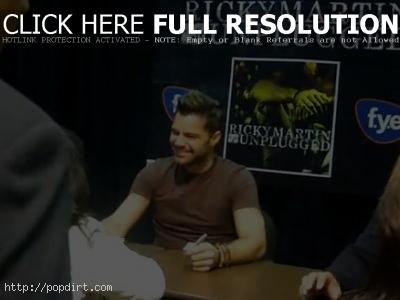 Jay Leno joked during his Tonight Show monologue on Monday night, “Congratulations to Ricky Martin. He was honored in New York as the Latin Recording Academy’s Person of the Year. He wasn’t there to accept the award in person. He was busy shooting an episode of VH1’s ‘Where Are They Now?'”

Univision Online spoke with Ricky Martin in a Q&A, where the singer was asked about the recent moves by stars to adopt children in poor countries, and whether he’s thought about adopting. “I adopted some years ago, and to this day I have three girls that are a part of my family,” Martin revealed. “I am not a person that likes to talk much about this topic, because I try to protect them to the maximum. Unfortunately in India the process of adoption is very complicated, especially for foreigners. They live in Calcutta [India], but I go there to visit them and I see them.”