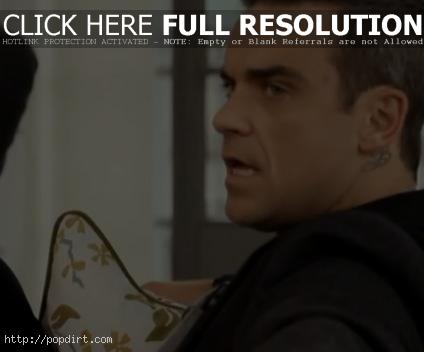 Newlyweds Robbie Williams and Ayda were planning to jet off to a remote destination to celebrate their honeymoon but have canceled the plan at the last minute. The pair plan on a romantic vacation later when the attention from their nuptials dies down and they’d be less likely to be pestered by paparazzi. “They’ve chosen to stay at home. They were thinking of going away but decided to stay where they’re most comfortable – in the house with their dogs,” a source told The Sun. “They want to squeeze in a proper honeymoon later in the year once the hype about their wedding has died down. Robbie also didn’t want to run the risk of them being photographed on their romantic getaway either.”

August 12, 2010 – Robbie Williams checked in with fans on his official web site at RobbieWilliams.com, discussing his marriage to Ayda Field and rejoining Take That. The British pop singer writes:

Hey all well nothing much going on in my life in the last few months ; )

Thank you so much for your well wishes…

Re.Take That I’m the happiest professionally that I’ve ever been not only have I gained a wife but I’ve also got 4 brothers now too….

Much love to you all