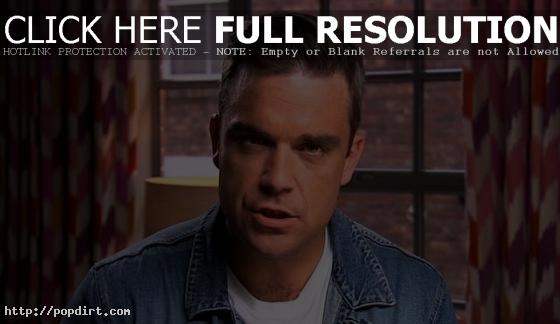 To celebrate the release of his forthcoming greatest hits album ‘In And Out Of Consciousness’, and to mark 20 years in music, Robbie Williams is inviting fans to ask him questions and he’ll answer them on YouTube. The deadline is October 31st. Robbie will be answering his favorite, funniest or most interesting questions on camera in December. “I’m guessing that a few of you out there might like to ask a question or two about the album or myself, and the good people at YouTube have given us the opportunity to converse,” Robbie says in the video announcing the opportunity. Watch it below.

August 28, 2010 – Robbie Williams is out with the music video to his new single ‘Shame’, featuring Gary Barlow. The clip stars the reunited Take That members sharing a spot of bromance in the rocky mountains. ‘Shame’ is off Robbie’s second best of album ‘In and Out of Consciousness: The Greatest Hits 1990–2010’, out October 11th via Virgin Records. Watch the Vaughan Arnell directed video below.

August 25, 2010 – Robbie Williams will be online for an exclusive 30-minute interview on Twitter this Thursday (August 26) at 11:30am BST, and this is your chance to ask him anything you like that can be fit in 140 characters. Follow Robbie at @RobbieWilliams.