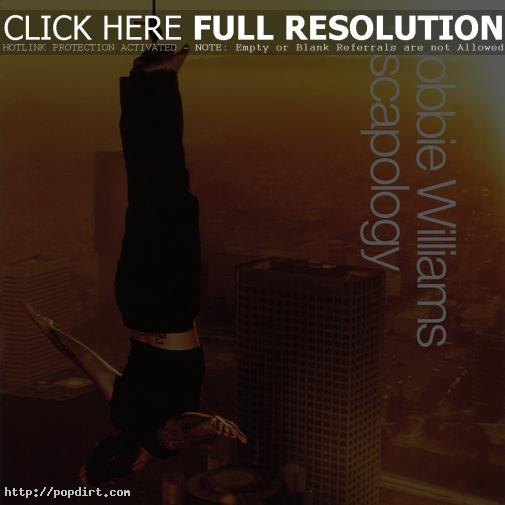 “Escapology” is a much deeper album than Robbie Williams previous studio albums, picking up different styles of music – there’s britpop, rock, punkrock, soul, pop, eighty’s sound – and the lyrics are more interesting this time: not only lost-man-ballades & “hey lady, jump in my bed”-uptempo songs are on “Escapology”, but also selfcritical, ironic lyrics (“Handsome man”, “Me & my monkey”), autobiographic content (“Nan’s Song”, “Hot fudge”) and criticizing showbizz (“How Peculiar”, “Come undone”). In an interview Robbie Williams gave before the release of “Escapology” he said: “I’m happy. I recorded four songs in past two days & it’s four #1’s!” …and he is right: there’s an awfull lot of #1 material on “Escapology”: the acoustic ballade “Sexed up”, the britpop-song “Monsoon”, the soulful duet “Revolution” with Rose Stone & the Queen-ish, desperate love song “Love somebody” might do aswell on charts as the first single “Feel”. Although the album is great, it won’t be the what Robbie Williams wanted it to be: “a classic like ‘Nevermind’ by Nirvana”. Maybe Robbie Williams has to work on this another few years.

August 1, 2003 – Moby will be opening for Robbie Williams at his gigs in Knebworth this weekend, and spoke with Radio 1 about how he’s looking forward to it. “I’ve known Robbie on and off for a few years and he was doing his Knebworth shows and he asked me if I would perform at the Knebworth shows,” Moby explained. “So I think Ash are performing as well. So it’s myself and Ash and Robbie and I don’t know, it’s just one of those things, when someone asks you to do something that you wouldn’t normally find yourself doing you almost have to say yes just to have the experience of it.”

August 1, 2003 – Robbie Williams tells The Sun he wants to join the bosses at his beloved Port Vale Football Club. The singer spoke out after being attacked by Vale for spending £10million to buy a private box at Chelsea’s Stamford Bridge ground, which he said was a gift from his IE management team.