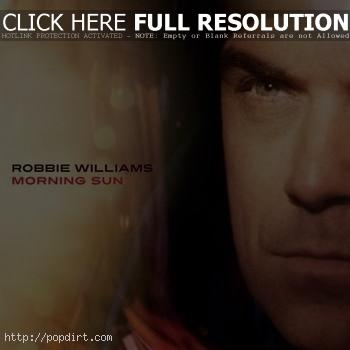 Robbie Williams is out with the video to his new charity single ‘Morning Sun’, official Sport Relief single. The song is the opening track off the British pop singer’s eighth solo studio album ‘Reality Killed the Video Star’, out now on Virgin Records. Watch Robbie rocket out of space on an intergalactic voyage through the stars in the Vaughan Arnell directed video below.

The former Take That singer thanked fans on his official web site after winning both the International Male Artist Of The Year and the NRJ Award of Honor, writing:

Sat in bed jet lagged can’t sleep.. it’s 4 in the morning
just got back to LA after our 3 day trip to Cannes…..

I wasn’t aware that you lot voted for those awards….

it was a big surprise, especially with the company I was in…
Buble, mika etc……..

once again thank you for taking the time…..

January 5, 2010 – Though Robbie Williams performed with Olly Murs on ‘The X Factor’ and promised to take the singer under his wings, Olly tells The Sun that the former Take That star hasn’t returned his messages. “I’m a bit disappointed Robbie hasn’t been in touch,” Olly admitted. “I texted him to say Happy New Year and congratulations on getting engaged but heard nothing back.”