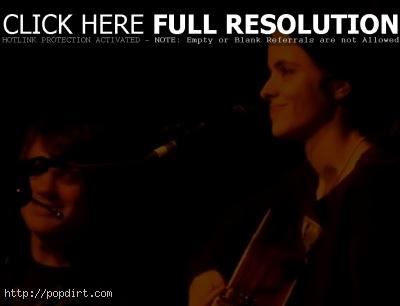 During the acoustic concert at Genghis Cohen in Los Angeles with Jalopy in, Samantha Ronson performed the song apparently titled ‘In And Out Of Love’, which she said was “for Lindsay,” and Lindsay Lohan was in the audience. After they “awwwed”, Sam said, “It’s not that sweet, it’s actually bittersweet.” Lohan can then be heard saying, “I actually got mad.” Continuing her dedication, Sam said, “You get your heart broken sometimes and then you unbreak it and break it again.”

The song included lyrics like “I’ll follow you out of control … I’m falling after you, in and out of love.”

Lindsay Lohan was spotted outside her girlfriend Samantha Ronson’s home in Los Angeles, carrying in a bag of food from McDonald’s, perhaps trying to serve as proof she’s been eating as concern has mounted for the 22-year-old’s weight loss.

Lohan had recently told Us Weekly, “I eat. I had my Big Mac yesterday from McDonald’s. I eat just as much as I always have. I think I’ve just been working a lot. It’s just down to stress and lack of sleep when I travel. I think it’s all that stuff that adds up.”

Lindsay Lohan’s father Michael, or someone pretending to be him, has been twittering despite shutting down his blog and claiming a truce with the 22-year-old. Among Michael’s twitter posts:

question of the day… how far would u go to saved a loved one whos in obvious need of help?

how long do we have to sit back and wait for something tragic to happen?

Video at AccessHollywood.com has since been removed.