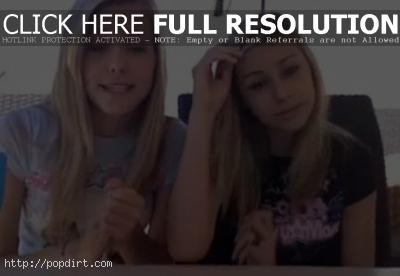 Savvy & Mandy checked in with fans on their YouTube channel on Tuesday (August 19). The sisters talked about going to Disneyland and meeting Mickey Mouse again, adding four new songs to their SNOCAP account, ‘Here I Am’ debuting this week on Radio Disney, their YouTube video contest, and they showed off their new merchandise – t-shirts and a poster. The big news – their CD is coming out sometime in October.

Talking about her birthday, Savvy said, “Some of you guys were wondering what I did for my birthday, and it was August 10th, and I recently, which was like two days ago, went to Disneyland, which was with a lot of my friends. It was awesome. It was really fun. It was crazy. I gotta meet Mickey Mouse, even though I’d already met him. The guy is pretty cool.”

As for new music from the girls, Savvy said, “We added four new songs on our Snocap store, which is our music store on our MySpace… I have to say I love ‘This Is Our World’. It’s a great song. It’s about being green. That’s something everybody is really into these days with global warming and trying to prevent it from happening. It’s pretty much the song saying whatever age you are, whatever you’re doing, just get up and help in any sort of way. It was from the heart Mandy.”