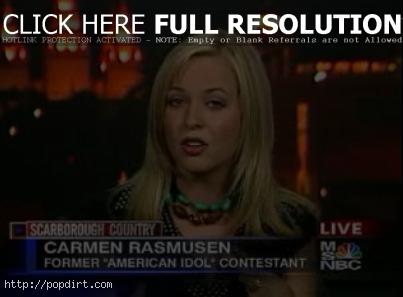 ‘American Idol’ fans are lining up for their shot at fame and fortune. MSNBC ‘Scarborough Country’ host Joe Scarborough discussed the fate of these latest hopefuls with former ‘Idol’ finalist Carmen Rasmusen and Katrina Szish of Us Weekly. Video of the segment, aired Tuesday (August 8), at Bing.com has since been removed.

August 7, 2006 – ‘American Idol’ producer Patrick Lynn was on the phone with The Bob Rivers Show on KZOK 102.5 FM in Seattle on Friday (August 4) to promote their auditions in Seattle on September 19th. They talked about the rules, the age limit, the long lines to expect, jumping through three hoops to get to Simon Cowell and company, and their intern Lindsay auditioned over the phone. The interview audio at bobrivers.com has since been removed.

July 30, 2006 – The Associated Press reports after discussing war and peace in the Middle East, President Bush squeezed in a 10-minute photo-op Friday with the ‘American Idol’ season five finalists. They got the photos. Bush got a harmonica, ‘Idol’ champ Taylor Hicks’ musical instrument of choice, engraved with ‘American Idol 2006’. Additionally, pictures are available from GettyImages and video is available from CBSNews.com below the cut.

July 23, 2006 – Contributed Anonymously: I attended the Rochester, New York American Idols Live concert, and Katharine McPhee was not there. There was a note posted on the doors when we arrived that she would be be performing due to illness. Well, lots of the people are the concert were angry. We spent so much money on tickets… and she doesn’t even show. Sure, she says she’s sick, but is she really?

Honestly, the show was better without her there. I think Katharine think she’s better to everyone and I’ve heard about the tension on the show. Kelly Pickler shone. With her new record deal from Simon Fuller, she’s the hottie of American Idol. Go Kelly! Bye Katharine!

Plus at the tour booth, nobody bought any of Katharine’s posters or pictures. Looks like she’s fading fast… I see a new Justin Guarini in the works, but at least he had class.