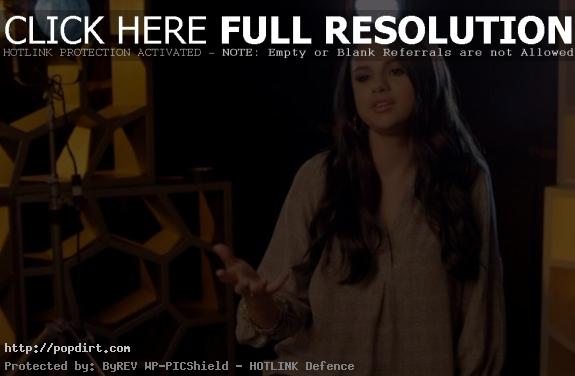 Selena Gomez, who was recently celebrated by VEVO for receiving 100 million views for three of her music videos, spoke about one of those videos, ‘Naturally’.

“‘Naturally’ for me was a defining moment in my music career,” Gomez explained. “It was my first kind of song that made me realize the style of music I wanted to do. It has a great message, it’s beautiful, it’s fun, it makes everyone want to dance and the video was just a blast. Chris Dooley did this one. He’s super sweet and he was good too. I was sixteen but it kind of was an older song, so it was like a very thin line.”

Talking about her wardrobe for the video, Gomez explained, “This outfit was really funny, because I was sixteen, so there was a lot of hands in the pot on how it was supposed to be visually. The dress I originally had did not have red tights underneath it, but that was a little too much skin, so we added the red, which actually makes it look better visually. I actually had a girl come to one of my concerts dressed in that exact outfit. She went and bought an outfit that looked like the one from ‘Naturally’, which was adorable.”

Discussing all of those hand movements in the video, Selena said, “I was a little uncomfortable doing this video though because it was literally all about the hands and all about the movement, and I’m not good at that anyway. I need things behind me to distract people from what I’m doing, so we had someone behind the camera helping me do my little hand movements that I also do on stage, because now I’m used to doing that because of ‘Naturally.'”

Quizzed about the visuals in the video and if Jack and Meg White were the inspiration, Selena said, “People have actually asked if there was a little White Stripes influence, but not really. Now that I’m looking at it, I totally get why, not no, we kind of just wanted to make it seem like a kaleidoscope.”