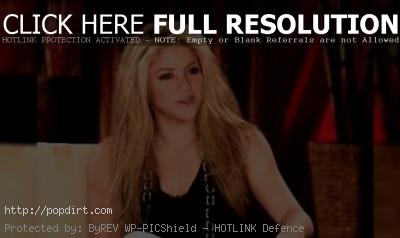 Shakira is out with a three-part making-of documentary for her ‘She Wolf’ music video, with the finished product at the end of part three. The footage features comments from the video’s director Jake Nava and others involved, as well as Shakira. The song is the lead release and title track off her third English studio album, out October 5th on Epic Records.

“It has a lot of fantasy dancing all throughout the video from beginning to end,” Shakira said about the music video.

“Time goes by and I feel a little bit more in touch with my own freedom,” Shakira explained. “I think ‘She Wolf’ is about that. It’s about the woman who knows what she wants. A woman who is in touch with her subconscious desire, and she fights for them with teeth and claws like a wild beast. It’s the woman of our time.”

“The she wolf is me, but it’s not only me, but it’s the women and the men of our time,” Shakira said about the song. “I think that the way we view things, the vision that we have of the world today is a little more open.”

“It’s the woman during the daytime, and the animal at night,” Shakira described the ‘She Wolf’. “I have always felt that I am not completely human in a way. This is gonna sound really odd, but I have always felt this animal inside of me. This other animal that doesn’t make a lot of sense. It’s just primitive, and I know that inside of me there is a whole world that the material world outside doesn’t see. Of course I am a she wolf.”