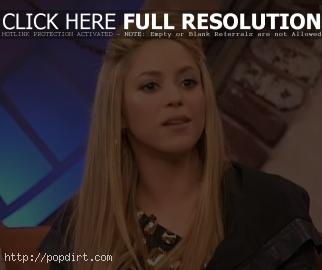 Shakira was spotted waving to fans outside the MTV studios in New York City on Tuesday (October 20). The Colombian pop singer was promoting her new album ‘She Wolf’ on ‘It’s On with Alexa Chung’.

On her biggest defect, Shakira said, “I am often very self critical and a perfectionist. I know that sometimes it works in favor but many times it works against me. I actually read somewhere that if you are looking for a job, or you are interviewing for a job, you should never say that you are a perfectionist, because they won’t give you the job. Apparently that’s a really bad thing to say, so don’t do that. I would be unemployed if I was interviewing for a job, because that’s probably the first thing I would say. That’s not such a good thing.”

On her state of mind, she said, “As Proust would say I’m in search of lost time. I think that I am trying to balance my life out a little bit. My album is about to come out and my life is getting crazy again. Very hectic and I’m trying to remain close to my friends and my family and my loved ones, which are everything to me.”